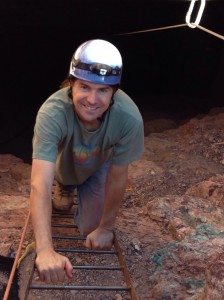 Presenting “The Milpillas Mine, Sonora, Mexico – A Modern Bonanza”

During college in the early 1980’s, he worked part-time at the Arizona Mineral Museum helping to curate the state collection and spent summers working for older brother William R. Jones at Root & Norton Assayers in Silverton, Colorado.

After graduating from Arizona State University with a B.S. degree in Geology in 1985, he immediately started working with minerals, first for noted Arizona collector Thomas N. McKee then for dealers Wayne and Dona Leicht of Laguna Beach, California. In 1986, he was hired by Bitner’s, a wholesale mineral dealership in Phoenix, as their mineral specialist where he worked until 1998.

After 1998 he struck out on his own as a mineral dealer. By this time, he had transformed his mineral collection into one focused exclusively on the minerals of Arizona. In 2012, he formed a new mineral dealership, Unique Minerals, Inc., which specializes in fine minerals for collectors and can be seen at most major mineral shows.

He helped organize the “Arizona Mineral Treasures” exhibition at the 2012 Tucson Gem & Mineral Show, organized the recent supplement to the Mineralogical Record magazine “Mineral Collections in Arizona” and is on the advisory board of the University of Arizona Mineral Museum in Tucson, Arizona. His collection of minerals from Arizona is considered to be one of the finest in private hands.

Evan has been dealing in minerals from the Milpillas mine since 2007 and co-wrote a recent article on the minerals of Milpillas for the popular European mineral magazine Extra-Lapis.