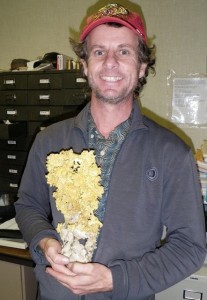 Mr. Anthony (Tony) Fraser was born and raised on the Central Victorian Goldfields. At a very young age, he developed a keen interest in rocks, minerals and fossils. Anthony was an active field collector and member of both the “Bendigo Gem Club” and “The Mineralogical Society of Victoria” as a teenager. Anthony played a pivotal role in the discovery of several new mineral species, including Ulrichite, Selwynite and Whycheproofite.

He graduated as a Geologist in 1990 and worked for several years in the industry as an Exploration Geologist and Mine Geologist throughout Australia. Anthony attended the Tucson Gem Show for the first time in 1994, launching a career as a full-time field collector and mineral dealer, co-founding the mineral business “Crystal Classics.
During early 2000’s Anthony founded “Gold Nugget Export” P\L, with a focus on prospecting – mining and trading for gold nuggets and gold specimens.
Anthony is currently actively involved in several mining entities and mining projects both in Australia and Internationally. Anthony is also Chairman and Senior Curator of the National Dinosaur Museum in Canberra, Australia.