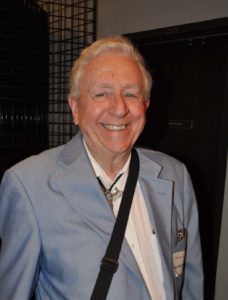 Bob Jones is one of the mineral legends. The Yale Peabody Museum inspired him to learn more about minerals when he saw a fluorescent mineral display there in 1935. His love of fluorescents evolved into a focus in copper and then lead species. A teacher for over 30 years, Bob has also been a significant author of mineral articles, books, and other publications for many of the world’s top mineral magazines and educational works. He is currently a Senior Editor at Rock and Gem Magazine and was awarded the prestigious Carnegie Mineralogical Award in 1998 to honor his contributions in mineralogical preservation.

His 40 years on the TGMS Show Committee makes him one of the world’s experts on the history of this now world-famous exposition of fine minerals.

History of the Tucson Show

In 1955, the Tucson Gem and Mineral Society held a small mineral show in a school cafeteria. It moved to the County Fairgrounds then to the Convention Center, but no one could have predicted the enormous success and significance the Tucson Show would have throughout the world. In 1961, Paul Desautels from the Smithsonian Institute supported the show in a historic way by bringing an exhibit of minerals to display for the first time. In 1972 Dr Peter Emery from the British Museum of Natural History brought an exhibit of pieces from the museum, making the show an international event. Various organizations have started at Tucson and several books were initiated at the show. The show grew because of the climate, the availability of minerals from Mexico and Arizona’s mines, through diligent work by the Tucson Society… and of course mineral enthusiasts like you!