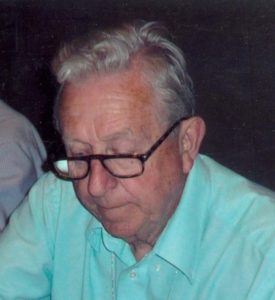 Inspired by the Yale Peabody Museum as a child, Bob Jones has become a true legend in the mineral community for his knowledge and experience in collecting. He is a retired school teacher who has been writing magazine articles since 1960. He has served as Senior Consulting Editor for Rock and Gem since the 1990s. He holds many awards including the Carnegie Mineralogical Award, and he has served on the Tucson Show committee for 40 years!
In 2003, the species bobjonesite was named in his honor, and he also  wrote the 50-Year History of the Tucson Show, published by the Mineralogical Record in 2004.
(He used to be known as Bob Jones but is now Evan Jones’s Dad!)

Around the World in 80 Years

In over 80 years of mineral collecting Bob Jones has been fortunate enough to visit most continents as a result of his participation in the Tucson Show and his magazine writings. His work with the Tucson Show brought him in contact with a host of wonderful people and this resulted unplanned, almost accidental trips to South America, Africa, Europe, Russia, and China. His Show participation also got him involved in script writing and in video work. Even his work as a writer, which began accidentally, sent him far afield. Bob will explain why he considers himself “the luckiest” rock hound in the world as he takes us through 80 years of his unplanned but enjoyable adventures. He is living proof that mineral collecting is the greatest hobby in the world.